What is the value of a temple? 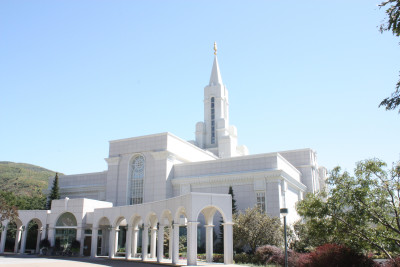 I often hear critics of the Church of Jesus Christ of Latter-day Saints complain about the cost of building a temple. To be sure, a temple is expensive to build and maintain, but what are the benefits of building a temple, outside of the spiritual benefits reserved only for worthy members? Are there tangible physical, economic, and sociological benefits that extend not just to the membership of the LDS faith, but also to those outside the faith?

Let's start at the beginning, how much does it cost to build a temple? This is a tricky question because temples come in all shapes and sizes, but most guesses I have seen range in the $20 to $25 million range. This is, indeed, a lot of money, but it is also probably eclipsed by the annual construction costs for chapels, church schools, office buildings, and mission offices. But let's look at where that money actually goes.

From what I understand, and someone at the Church Offices can correct me on this if I am wrong, much of that money goes into materials, which are usually sourced in the host country. I would imagine, but cannot be sure, that most other building materials are also sourced locally (especially concrete which is notoriously hard [see what I did there?] to ship from Salt Lake City). Most businesses I know of sell goods like building materials at a profit, even when selling to the Prophet (someone stop me!), so this is all money that goes into the local economy, to pay employees, managers, and owners of building supply businesses in the area where the temple is being built.

Now let's look at the actual building process, since we have the materials. King Solomon's temple was constructed of pre-cut blocks that were assembled on site:

New temples need someone to build them, and there is the sound of construction trucks, concrete, and hammer and nail at modern sites. These all need a person to operate them, a craftsman to lay footings, pour foundations, frame the building; electricians, plumbers, framers, finish carpenters, stained glass makers, and more. Though I can imagine that some of these workers are willing to donate their time, most, if not all are paid for their time, which puts more money into the local economy. I would imagine this is appreciated even more in areas like Central and South America, but not unappreciated elsewhere. (Note, I know that there are some parts of the construction of temples that are made in Utah and sent to the temple, such as the stained glass windows [Hello Tom!], but the majority of the labor and materials is purchased from local companies.)

Let's not forget local governments. Though many areas give religious buildings a pass when it comes to property taxes, this is not always the case. Even when it is, there are permits to be filed, plans to be approved, inspections to be made, and final signoffs that have to happen before a temple can become operational. This is, yet again, more money that is going into local economies.

Once the temple has been built, there are ongoing operational costs; water, sewer, electricity, natural gas, internet, etc. There are provided by local companies or municipalities at a cost, and yet more money flows into the local economy. People travel to these temples, often from long distances, and purchase hotel accommodations, food, and bus/plane tickets, all of which benefits the local economies.

Finally, the money to build these temples is donated by members of the LDS Church who know exactly how the money is going to be used. They give this money and attend the temple because they believe it makes them a better person, a better citizen, and a better Christian. Whether you agree with their decision or not, to say that building a temple is a waste of money, or that the money could be better spent on the poor (even though the church donates millions to the relief of the poor inside or outside the church membership), there are a couple of things to remember: