The Book of Abraham: Taking it for what it is...

I have had some interesting thoughts of late about the Book of Abraham. I have been reading all the possible sources for the book, and whether it was translated from the fragments we have in Salt Lake City, and so on. If you are interested in reading the things that brought on this post, go to FAIR and read what is there. I want to look at the story contained in the Book of Abraham from a slightly different angle, one that I have never seen explored before. Abraham begins his narrative with some specific information, which I had overlooked for some time:

1 In the land of the Chaldeans, at the residence of my fathers, I,Abraham, saw that it was needful for me to obtain another place of residence;

2 And, finding there was greater happiness and peace and rest for me, I sought for the blessings of the fathers, and the right whereunto I should be ordained to administer the same; having been myself a follower of righteousness, desiring also to be one who possessed great knowledge, and to be a greater follower of righteousness, and to possess a greater knowledge, and to be a father of many nations, a prince of peace, and desiring to receive instructions, and to keep the commandments of God, I became a rightful heir, a High Priest, holding the right belonging to the fathers.

To recap: Abraham needs to find a new place to live. Things are not going well for him at the residence of his fathers. So, what would any normal person do? Look for somewhere to live, somewhere else to go, right? Not with this Abraham, he instead says that he sought an appointment to the priesthood. Now, the question I asked myself was, "How would obtaining the priesthood give him greater happiness and rest?" I needed to know more about what the priesthood entailed in the days of Abraham.

To understand this, we need to remember that priests were not just religious leaders, they were not just about church, peace, love, and breaking bread. The priests in Chaldea were astronomer priests, men who understood how to use the stars for practical and mystical purposes. Someone possessing this type of knowledge would be valuable in Chaldea and the surrounding countryside. Abraham was looking to get his degree, as it were, in Astronomy with a minor in Astrology; he wanted to become a Magi.

That Abraham was, in fact, a Magi, is confirmed by many sources, including Pseudo Eupolemus, who also points out that Abraham taught the Phoenicians and the Egyptians this art. In the Book of Abraham, he mentions that he succeeded in becoming a priest:

...I became a rightful heir, a High Priest, holding the right belonging to the fathers. [Abraham 1:2]

Because of this, he was later to have been sacrificed on an altar by a rival Egyptian priest of Pharaoh. Abraham then makes a point of saying that he has included a figure that represents that couch. This is the figure that he refers to. 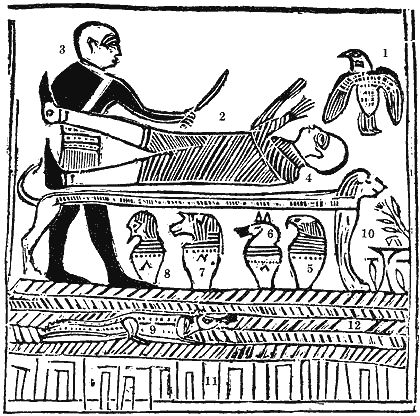 It should be noted here, that many prominent Egyptologists have pointed out that this is a typical Lion Couch scene, and I do not deny this point. There are some differences, such as the bird that is said to represent the Angel of the Presence, but it is at least similar to the Lion Couch scenes in the Book of Breathings ( for more see this article). We will discuss this apparent discrepancy soon, at least my opinion on the reasons he used it, but for now we will point out that this is a figure so we can know what the couch looked like, that is why Abraham said he included it:

12 ...that you may have a knowledge of this altar, I will refer you to the representation at the commencement of this record. [Abraham 1:12]

Abraham explains that the "Angel of the Presence" comes to him and saves him from the idolatrous priest, and explains that he is Jehovah, and that he has come to deliver him and send him on a mission to a strange land. Now Abraham takes his journey to the land of Canaan. He takes his wife,  and his brother and his wife. Abraham's training would have served him well in Canaan, and we find him going about Canaan building altars and worshiping the Lord. [Abraham chapter 2].

So far this fits well with what we know about Abraham and his story from outside sources. But here is where the story gets really interesting for me. Abraham goes to Egypt, the land of the priests that had tried to sacrifice him in his home town, because of a famine in the land of Canaan. Abraham now has a bit of a problem, in that his chosen profession was not teaching about Egyptian gods, but rather about Jehovah, the Angel of the Presence. Abraham would need to show that his understanding of the Universe, the movement of the planets and stars, was not only greater than the Egyptian Priests, but also useful to them. It was all fine and good to know how the stars moved, but you had to be able to tell the king, in this case Pharaoh, how that was going to affect the daily lives of him and his citizens.

Here the Book of Abraham does not disappoint. Abraham tells Pharaoh all about the movements of the planets, the moon, the stars, and even talks about my favorite star, Kolob. All of this is interesting, and from a geocentric reference point makes sense, but here is where I found the key to understanding the facsimiles.

« What is the Church? - The Book of Abraham: Understanding the why behind the facsimiles »